Imagine you’re struggling to figure out how to move your family business forward in a crowded market. Your competitors are huge, entrenched in your industry, and content to squeeze your little company out of business.

It’s a challenge we often hear about from new clients, especially at companies that want to explore content marketing as a more humane (and less expensive) alternative to traditional advertising. At design conferences and digital agency meetups, we often hear about content strategy as if it’s only been around for a few years. However, I want to share a story about someone who figured out how content can make a market—and he did it over a century ago.

Lori and I spent last Sunday at the Philadelphia Museum of Art, viewing the local stop on the global tour of “Discovering the Impressionists: Paul Durand-Ruel and the New Painting.” I’m no art historian, but Lori’s always loved Impressionists. The exhibition’s audio tour and written supplements immediately struck me with a story that’s surprisingly relevant to marketers and business owners.

It’s the 1860s. Monet, Renoir, Degas, Manet, and Pissarro aren’t anywhere close to becoming household names. Nobody would buy their paintings, except for a single art dealer: Paul Durand-Ruel. His contemporaries thought he was nuts for championing artists who had been rejected by the Paris establishment. And yet, he developed one of the earliest—and most effective—content marketing programs. His strategy worked so well, it overthrew society’s notions of art and our perception of visual artists.

Create a new narrative. Durand-Ruel had already pivoted his family’s business from paper merchant to art gallery by the time he hit his thirties. However, he discovered that most art patrons made their decisions based on the opinions of a handful of art “experts,” usually stationed next to auctioneers at market. Durand-Ruel, pledging to “protect and defend art above all else,” stopped trying to change the opinions of his art world colleagues. Instead, he abandoned traditional expectations of showing new art at highly curated salons, he championed his artist roster to popular journalists, and he created spectacular solo exhibitions designed to make stars out of his artists.

Find validation in new markets. Instead of worrying about snobbish audiences in Paris, Durand-Ruel hit the road. Establishing a network of international galleries throughout the 1860s and 1870s gave him unprecedented access to wealthy art patrons who didn’t know they weren’t supposed to like Impressionist paintings. An 1886 New York exhibition provided formal recognition for Durand-Ruel’s stable of artists, resulting in ripples of new business back to the Paris home office over the next decade. Paris art dealers had been happy to mock unsophisticated American tastes, just up to the point when American wallets were ready to embrace Impressionists above all other styles of art.

Blend accessibility with scarcity. Durand-Ruel wasn’t content to stage exhibitions and provide free gallery showings. He actually opened up his family’s apartment to patrons, critics, reporters, and other potential influencers. Seeing these now-famous works of art in the context of a family home turned doubting viewers into appreciative buyers. Giving away all these experiences helped drive demand for patrons who wanted to hang Impressionist art in their own homes, and that’s where Durand-Ruel’s business genius kicked in. In exchange for his all-in support for Impressionist, Durand-Ruel won nearly exclusive rights to sell their work. By the time his strategy played out, Durand-Ruel’s galleries were the only source for Impressionist painting, driving up market valuations and earning significant premiums for his family business.

Like any sound content marketing program, Durand-Ruel’s strategy took some time to find the right product/market fit and generate results. (He nearly went bankrupt a few times before his company started seeing huge success in his sixties.) Thanks to today’s technology and our society’s ravenous appetite for stories, a content strategy initiative doesn’t have to take decades to kick in—many of our clients see results from targeted communication engagements as short as six months.

When you hear content strategists telling you about the value of “giving away your best stuff,” it’s much like the experience of getting into Durand-Ruel’s Paris apartment for a sneak peek. But, to actually bring that work home, your audience has to buy your product, sign up for your service, or take whatever next action you want them to take. Building clarity around what you sell and why you’re different practically eliminates your competition, while focusing only on a core audience with money to spend grows your conversion rate. 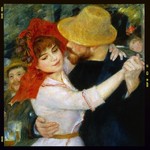 Our team only gets to give this talk from time to time, so here's your chance to see a replay of our most recent broadcast about Durand-Ruel's influence on modern content marketing.

Thanks! Now check your email.

Joe Taylor Jr. has produced stories about media, technology, entertainment, and personal finance for over 25 years. His work has been featured on NPR, CNBC, Financial Times Television, and ABC News. After launching one of public radio's first successful digital platforms, Joe helped dozens of client companies launch or migrate their online content libraries. Today, Joe serves as a user experience consultant for a variety of Fortune 500 and Inc. 5000 businesses.

Discover how the right stories can help you grow a six-figure business.

As a radio producer, technology consultant, and startup founder I had to learn how to tell stories that inspire audiences. I'd love to share some resources and ideas to help you connect with your perfect customers, clients, and fans.

(I won't sell, rent, or share your personal information with anyone, for any reason.)